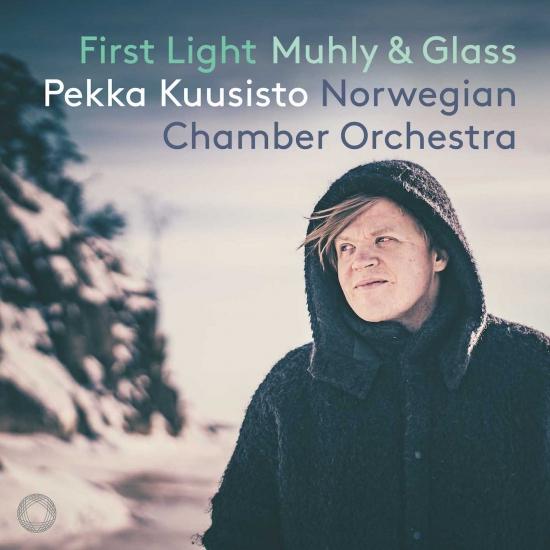 Two New Yorkers in A Nordic Light: Violinist Pekka Kuusisto and the Norwegian Chamber Orchestra present First Light, the first fruit of Kuusisto’s tenure as the ensemble’s Artistic Director, on which two eminent New York composers are cast in a Nordic light. The album offers the world premiere recording of Nico Muhly’s Shrink (Concerto for Violin and Strings), a unique, remotely-recorded rendition of Philip Glass’ The Orchard by Kuusisto and Muhly, and Kuusisto’s new string orchestra arrangement of Glass’ “Mishima” String Quartet No. 3.
Violinist, conductor and composer Pekka Kuusisto is renowned for his artistic freedom and flair in directing ensembles. Since its formation in 1977 the Norwegian Chamber Orchestra has established itself as one of the foremost chamber orchestras on the international classical music scene today. Nico Muhly is one of the most-performed composers of his generation, and appears as pianist on this album.
“Philip Glass had been present in our interactions since the beginning. He and Nico go way back as colleagues, whereas I’ve been merely an admirer and occasional resident of Philip’s music. My musical education did not include works by American composers, and while I’ve since made my own explorations, Nico has in many ways functioned as my guide to New World music, past and present. Against this background, coupling Shrink with a new orchestration of Philip Glass’ Mishima quartet seems appropriate. Mishima, in my opinion, hosts some of the finest sets of elements and proportions Philip has developed. Its developments still strike me as both surprising and reassuring, and match my fondness for the Glass language at every turn. I’ve thought about translating it for string orchestra for some years now, and I’m hopeful this version of the work will join its slimmer older brother in the repertoire. The pandemic-era, long distance recording of Philip Glass’ The Orchard is an expression of gratitude to Philip on behalf of myself and Nico, and to the Norwegian Chamber Orchestra for their stellar work with us. They took complete ownership of Shrink at its European premiere in early March 2020, just one night before the pandemic shut Oslo down. Being able to record with them in October of the same year was a ray of light during a most agonizing autumn. I’m beyond happy to begin my recording relationship with the Norwegian Chamber Orchestra with this release.” (Pekka Kuusisto)
Pekka Kuusisto, violin, director
Nico Muhly, piano
Norwegian Chamber Orchestra 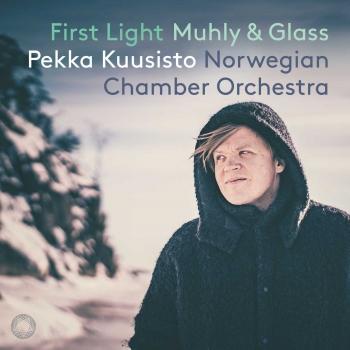 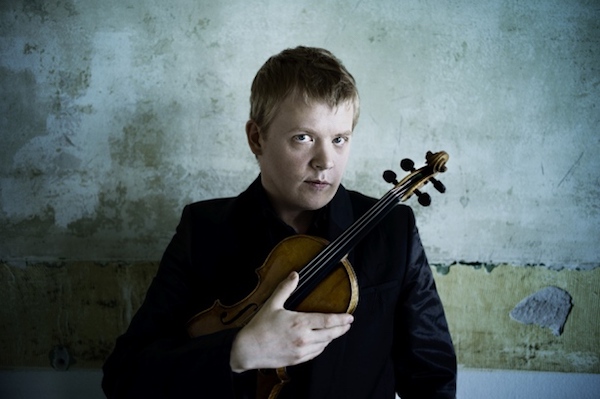 Pekka Kuusisto
Violinist, conductor and composer Pekka Kuusisto is renowned for his artistic freedom and fresh approach to repertoire. Widely recognised for his flair in directing ensembles, Kuusisto is Artistic Director of the Norwegian Chamber Orchestra (from season 21/22), and Artistic Partner with The Saint Paul Chamber Orchestra and Mahler Chamber Orchestra. He is also a Collaborative Partner of the San Francisco Symphony, and Artistic Best Friend of Die Deutsche Kammerphilharmonie Bremen. In season 20/21 Pekka Kuusisto is Artist in Residence with the hr-Sinfonieorchester Frankfurt with whom he will appear as soloist, conductor and chamber musician. He is also In-Residence at Milton Court at the Barbican, which culminates in a concert with the Norwegian Chamber Orchestra.
Kuusisto is an enthusiastic advocate of contemporary music and a gifted improviser and regularly engages with people across the artistic spectrum. Uninhibited by conventional genre boundaries and noted for his innovative programming, recent projects have included collaborations with Hauschka and Kosminen, Dutch neurologist Erik Scherder, pioneer of electronic music Brian Crabtree, eminent jazz-trumpeter Arve Henriksen, juggler Jay Gilligan, accordionist Dermot Dunne and folk artist Sam Amidon. In the coming season he will premiere new concerti by Bryce Dessner, Djuro Zivkovic and Enrico Chapela and chamber works by Sauli Zinovjev and Calliope Tsoupaki. He also performs other concertos written for him including Daníel Bjarnason’s Violin Concerto, Anders Hillborg’s Bach Materia and Nico Muhly’s violin concerto, Shrink. In recent seasons Kuusisto has premiered new works by Sauli Zinovjev, Anders Hillborg, Philip Venables and Andrea Tarrodi. He also tours around the world with orchestras such as Chicago and Los Angeles symphony orchestras, Concertgebouworkest, Orchestre de Paris, Deutsches Symphonie-Orchester Berlin, WDR Sinfonieorchester Köln, London Philharmonic Orchestra, BBC Symphony Orchestra and the Philharmonia, as well as Tapiola Sinfonietta, and the Australian, Scottish and Swedish chamber orchestras.
Kuusisto has released several recordings, notably for Ondine and BIS. He has recently recorded Ades’ Violin Concerto with Aurora and Nicolas Collon for Deutsche Grammophon, Hillborg’s Bach Materia and Bach’s Brandenburg Concertos Nos.3 and 4 with the Swedish Chamber Orchestra and Thomas Dausgaard for BIS and Daníel Bjarnason’s Violin Concerto with the Iceland Symphony Orchestra with the composer conducting for Sono Luminus. Past releases include Erkki-Sven Tüür’s Noesis concerto for violin and orchestra for Ondine and Sebastian Fagerlund’s violin concerto Darkness in Light for BIS, both recorded with Finnish Radio Symphony Orchestra and Hannu Lintu.