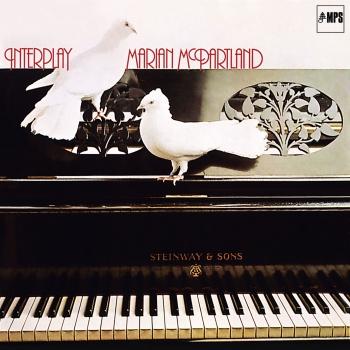 Marian McPartland
Best known as the host of the weekly national radio program Piano Jazz, Marian McPartland helped to popularize jazz with her intricate knowledge and prowess on the piano. She made the program one of the most popular in the history of public radio.
Born to a musical mother who played classical piano, she studied at the famed Guildhall School of Music in London. Her first professional activity was as part of a touring vaudeville act featuring four pianists. During World War II, she entertained the troops and while playing in Belgium met her late husband, cornetist Jimmy McPartland, whom she married in 1945. They relocated to the U.S. in 1946, whereupon she performed in his band in Chicago. She formed her first active trio in 1950 for an engagement at the Embers in New York. Two years later, she began what would be an eight-year residency at the Hickory House in New York with her trio.
In 1963, she worked with the Benny Goodman Sextet, and in 1965 she began her radio career, at WBAI in New York. In 1970 she started her own record company, Halcyon Records, one of the first jazz women to do so. In 1979, she began her weekly radio show Piano Jazz, which -- after 30 years of continuous programming -- became the longest-running syndicated National Public Radio program, and led to McPartland's induction into the National Radio Hall of Fame in 2007. An intimate program involving just her and a guest -- usually a pianist -- the program won numerous awards, including the Peabody Award. Many of the programs have been subsequently released on compact disc. As part of the segments, McPartland interviewed the guest, drawing out colorful anecdotes and stories about their careers. The shows also included performances of McPartland and the guest together. Taken as a whole, the series presents a formidable history of jazz.
Her playing career also included piano tours with such greats as Earl Hines, Teddy Wilson, Ellis Larkins, and Benny Carter. She performed with symphony orchestras and at many of the major jazz festivals, and received numerous awards, including a DownBeat Lifetime Achievement Award in 1997.
McPartland received several honorary doctorates as well as a Grammy Trustee's Award for lifetime achievement. She also authored The Artistry of Marian McPartland, a collection of transcriptions, and Marian McPartland's Jazz World: All in Good Time, a collection of her jazz profiles.