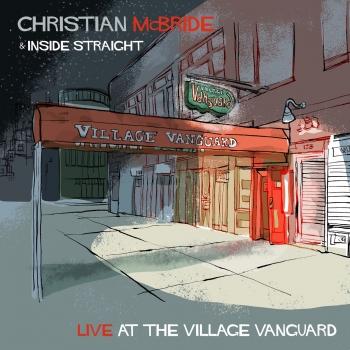 Live at the Village Vanguard

Christian McBride
moved to New York in 1989 to pursue classical studies at the Juilliard School. There he was promptly recruited to the road by saxophonist Bobby Watson. Call it a change in curriculum: a decade’s worth of study through hundreds of recording sessions and countless gigs with an ever-expanding circle of musicians. He was finding his voice, and others were learning to listen for it.
In 2000 the lessons of the road came together in the formation of what would become his longest-running project, the Christian McBride Band. Praised by writer Alan Leeds as "one of the most intoxicating, least predictable bands on the scene today," the CMB—saxophonist Ron Blake, keyboardist Geoffrey Keezer, and drummer Terreon Gully—have been collectively evolving McBride's all-inclusive, forward-thinking outlook on music through their incendiary live shows, as chronicled on 2006’s Live at Tonic. Part excursion, part education, the CMB is a vehicle built on a framework of experience and powered by unfettered creativity: a mesmerizing dance on the edge of an electro-acoustic fault line.
In 2009 McBride began focusing this same energy through a more traditional lens with the debut of his critically-acclaimed Inside Straight quintet, and again with the Christian McBride Big Band, whose 2012 release The Good Feeling won the GRAMMY for Best Large Ensemble Jazz Album. As his career entered its third decade, McBride added the role of mentor, tapping rising stars pianist Christian Sands and drummer Ulysses Owens, Jr. for the Christian McBride Trio’s GRAMMY-nominated album Out Here.
He is also a respected educator and advocate, first noted in 1997 when he spoke on former President Bill Clinton's town hall meeting "Racism in the Performing Arts." He has since been named Artistic Director of the Jazz Aspen Snowmass Summer Sessions (2000), co-director of the National Jazz Museum in Harlem (2005), and the Second Creative Chair for Jazz of the Los Angeles Philharmonic Association (2005).
In 1998 he combined roles, composing "The Movement, Revisited," a four-movement suite dedicated to four of the major figures of the civil rights movement: Rosa Parks, Malcolm X, Muhammad Ali and Dr. Martin Luther King, Jr. The piece was commissioned by the Portland (ME) Arts Society and the National Endowment for the Arts, and performed throughout New England in the fall of 1998 with McBride's quartet and a 30-piece gospel choir. For its tenth anniversary, "The Movement, Revisited" was expanded, rewritten, and revamped to feature an 18-piece big band and four actors/speakers in addition to the gospel choir. It was performed in Los Angeles at Walt Disney Concert Hall, and praised by the Los Angeles Times as "a work that was admirable—to paraphrase Dr. King—for both the content of its music and the character of its message."
Currently he hosts and produces “The Lowdown: Conversations With Christian” on SiriusXM satellite radio and National Public Radio’s “Jazz Night in America,” a weekly radio show and multimedia collaboration between WBGO, NPR and Jazz at Lincoln Center, showcasing outstanding live jazz from across the country. With his staggering body of work, McBride is the ideal host, drawing on history, experience, and a gift for storytelling to bridge the gap between artist, music, and audience. He brings that same breadth of experience to bear as Artistic Advisor for Jazz Programming at the New Jersey Performing Arts Center (NJPAC).
Completing the circle is his work with Jazz House Kids, the nationally recognized community arts organization founded by his wife, vocalist Melissa Walker. Exclusively dedicated to educating children through jazz, the “Jazz House” concept brings internationally renowned jazz performers to teach alongside a professional staff, offering students a wide range of creative programming that develops musical potential, enhances leadership skills, and strengthens academic performance. This shared celebration of America’s original musical art form cultivates tomorrow’s community leaders and global citizens while preserving its rich legacy for future generations.
Whether behind the bass or away from it, Christian McBride is always of the music. From jazz (Freddie Hubbard, Sonny Rollins, J.J. Johnson, Ray Brown, Milt Jackson, McCoy Tyner, Roy Haynes, Chick Corea, Herbie Hancock, Pat Metheny, to R&B (Isaac Hayes, Chaka Khan, Natalie Cole, Lalah Hathaway, and the one and only Godfather of Soul himself, James Brown) to pop/rock (Sting, Paul McCartney, Carly Simon, Don Henley, Bruce Hornsby) to hip-hop/neo-soul (The Roots, D'Angelo, Queen Latifah) to classical (Kathleen Battle, Edgar Meyer, Shanghai Quartet, Sonus Quartet), he is a luminary with one hand ever reaching for new heights, and the other extended in fellowship—and perhaps the hint of a challenge—inviting us to join him.