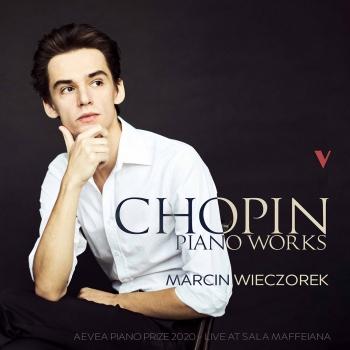 Marcin Wieczorek
Born on 12 July 1996. He is a student of Stefan Wojtas at Bydgoszcz Music Academy, having previously studied with Ewa Pobłocka and Paweł Wakarecy. He has won many prizes in international piano competitions, including first prize in the ‘La Palma d’Oro’ in Italy (2019) and first prize in the Rzeszów International Fryderyk Chopin Piano Competition (2014). In 2018 he won a competition at Indiana University for performances of works with orchestra. He has performed in concerts and festivals in Europe and the United States, at the Auer Hall of Indiana University in Bloomington, Ganz Hall of Roosevelt University in Chicago, NOSPR Hall in Katowice, and the philharmonic halls of Warsaw, Łódź and Pomerania.