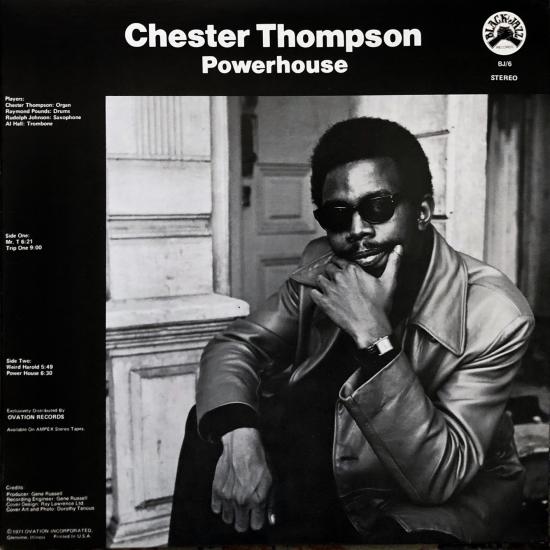 "Contacted by phone at his home just south of San Francisco, Chester Thompson is quick in his response to a question about a record he made in three hours on a Sunday afternoon fifty years ago, Powerhouse. 'I was a young man, and it was an opportunity to show people that I could play a Hammond B-3 organ.' Little did Thompson know then that he was showing people who would place him on an unexpected career path into the whirlwind of pop music. Louis Pain, an outstanding B-3 player in the Pacific Northwest, knows the story behind Thompson being hired by one of the hottest pop-funk bands in the country. 'I'd been listening to Chester for a few years,' he tells this writer. 'I was going to the Fillmore district club, the Off Plaza, where his trio played mainly soul cover tune. [So] when I was living in a house with Tower Of Power's guitarist Bruce Conte, I played him Chester's album, telling him that this was who the band should hire to play keyboards as they were on the verge of getting someone else.' Pain also tried to interest TOP saxophonist Lennie Pickett in hiring Thompson. 'Lennie was un-persuaded. He said, 'I know this cat can't play the bass pedals like Billy Preston,' and I replied that actually he could. Lennie, going ballistic, said, 'I'm going to go down to this guy's gig just so I can tell you how full of crap you are!' Conte, Pickett and band drummer David Garibaldi, with Pain tagging along, did just that. They were thunderstruck. Tower Of Power bought Thompson a B-3 and he stayed in the band for the next ten years, until 1983. Then he joined Santana, working with that globally successful rock band until 2009. In addition to his obvious familiarity with 1960s soul jazz, the B-3 dynamo proves to have modern jazz inclinations. Sax man Rudy Johnson, influenced by John Coltrane and Eddie Harris, slathers his soulfulness over the tunes. Chester didn't know trombonist Al Hall, Jr. and drummer Ray Pounds before the record date and sometimes the music sounds under-rehearsed, but in the end Powerhouse delivers the goods." (Frank-John Hadley, Downbeat)
Chester Thompson, organ
Raymond Pounds, drums
Rudolph Johnson, saxophone
Al Hall, trombone
Digitally remastered 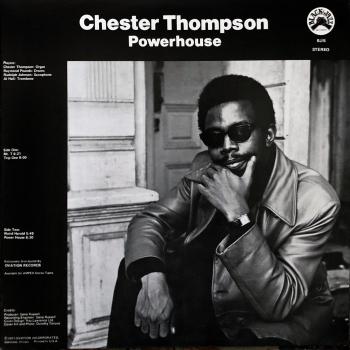 Chester Thompson
Earthy, energetic, exciting are all terms that have been used to describe the musical style of Santana keyboardist(1983-2009), Chester Thompson. He joined the band in 1983, and brought an impressive blend of talent, versatility and skill that helped drive the group’s powerful blues-based, Latin-flavored rock ‘n roll sound.
Thompson started playing the piano at his home in Oklahoma City at age five, picking out the notes from popular songs he heard on the radio. His parents quickly recognized his innate talent and arranged for formal piano lessons. And, it wasn’t long before Thompson started playing both piano and organ for the choir at his church. By the age of 13, Thompson had discovered jazz, which became a major, life-long influence, and by the age of 16, he had switched almost exclusively to the Hammond organ, and was playing in high school rock bands.
It was while still in high school that Thompson realized he could make a living as a professional musician. He’d been performing in bands at gigs throughout the state of Oklahoma for a couple of years, when he caught the ear of Rudy Johnson. As he was losing his keyboardist, Johnson asked Thompson to join the Rudy Johnson Trio and, at age 19, Thompson packed his bags and spent the next three years touring the country with that group.
One of Thompson’s first performances with the Rudy Johnson Trio was in San Francisco. He liked the city enough to make it his home, and he moved to the Bay Area permanently when the band decided to split up in 1969. At first, he took a day job at a bank while he broke into the San Francisco music scene by playing clubs at night. He spent the next few years playing around the Bay Area, and landed a regular gig as the keyboardist with Jules Broussard, which eventually evolved into Thompson leading his own band. It was during this time that Thompson also released his first album under the Black Jazz label, a solo project titled, “Power House”.
In 1973, Thompson was playing at a club and was heard by a member of Tower of Power. Although Thompson had ‘retired’ from the road, he was convinced to join the band as keyboardist. And, for the next ten years, Thompson not only filled out the band’s distinctive R & B/funk sound with his dynamic keyboard style, he wrote many of the group’s songs. In fact, he was responsible for most of Tower of Power’s instrumental hits during a period that most critics and fans agree was the group’s peak.
From 1983 to 2009 starting with his debut on “Beyond Appearances”, Thompson injected the band’s music with a powerful, creative energy that has added new dimension to their sound. In addition, he has continued to make contributions in other areas. He not only co-wrote, with Carlos, the songs on the instrumental album, “Blues for Salvador,” he also provided an inspirational spark during the recording of it’s Grammy Award-winning title track. In addition, Thompson also collaborated with Carlos on nine songs that were included on “Spirits Dancing In the Flesh”.
With the Santana Band, from 1983 to 2009 Chester Thompson found both the ideal steady gig–one that is a source of inspiration as well as a vehicle for expression as a musical artist. As an added bonus, he’s had opportunities to play with some of the other great musicians and groups, including Wayne Shorter, Earth, Wind & Fire, The Temptations and many others.
Hard working, dedicated, and extremely versatile, he not only played the organ, but commanded a full rack of emulators, synthesizers and keyboard controllers for recordings and in performance. And, in sharing his distinctive talents for writing, playing and performing, he has left a lasting impact upon the “the Santana sound.”