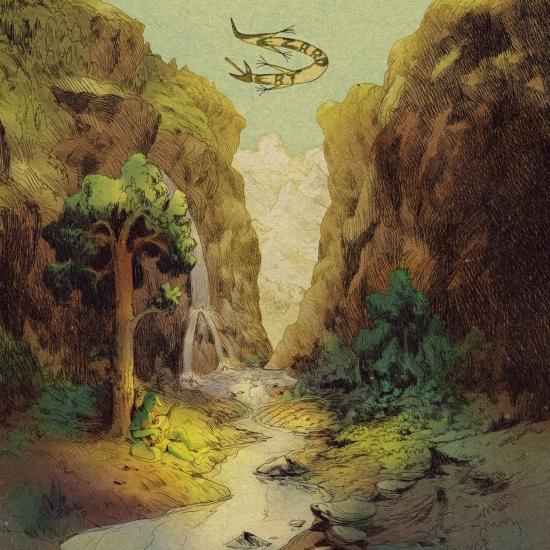 In the spirit of its creator, Lézard Vert (Green Lizard) is much more than a music band. It hails a concept of participation, a record label in itself, of which it boldly assumes the parenthood, but where each musician plays on musical pieces of their peers. A concept that shaped from the Carrousel experience. During a prolonged retreat in Manapany “country of Lézard Vert”, Zoun then started to lay the foundation for the album eponymous album. Zoun concurrently follows the career of two accomplished musicians, namely; Teddy Baptiste and Kiki Mariapin, with whom he occasionally performed, with Gilbert Pounia who provoked the spark leading to the encounter with Philippe de Magnée, a Belgium born sound engineer, invited on Reunion island to record Ziskakan.
Pioneer of the electric maloya, agile composer of various influences, Zoun, is proud to see his Lézard Vert resurface on turntables. This new version initiated by Wazis Pounia gave birth to a collaboration between Ziskakan and the Mauritian label, Babani Records. The remastering has been entrusted to Neil Combstock, sound engineer of the label, based in the United Kingdom and the illustration to the Mauritian artist, Guillaume Clarisse, all under the art direction of Avneesh Bacha. This reissue in 33turns vinyl discs and streaming has the merit of bringing to the ear a whole new generation, recorded in 1983, a key era in the history of Reunionese music. With the passing of time, a number of musical treasures have been unfortunately lost, forgotten, or never even recorded. Thus, when the opportune presents itself, it is of our duty to honour them with a re-publishing.
Zoun aka. Joseph Toquet, flute, guitar
Jean-Philippe Bideau, guitar
Teddy Baptiste, guitar, congas
Kiki, tabla, percussions
Joel, triangle
Produced by Ziskakan in 1983 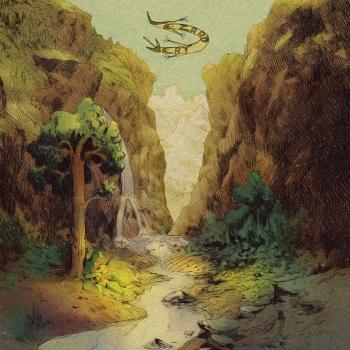 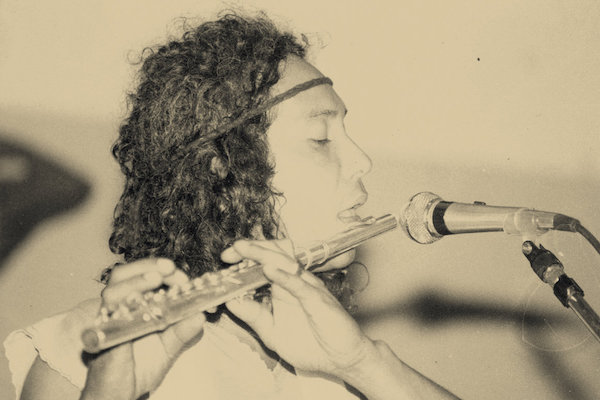 Zoun
started early, at the age of 12, he became a ballroom musician. Initially oriented to become a French teacher, he is rapidly seduced by the sweet sounds of music that certainly influenced his path in life.
In 1983, he released "Lézart Vert". With Kiki Mariapin on bass guitar and tablas, Teddy Baptiste and Jean-Philippe Bideau on guitars. The audio cassette tape featured only instrumental music and was produced by the Ziskakan association. The band played in various spots and venues, such as gymnasiums, discotheques and stages in major popular events. Between two concerts, he continued by the best to explore the never-ending universe of maloya. Surrounded by the best musicians of the island such as Jean-Jacques Harrison and Philippe "Kawa" Chavriacouty or Yves Antoine and Frédéric Borne.
In 1985, Zoun's repertoire flourishes with the release of "Fler Kann", eight tracks recorded at Studio 102 Productions, the brand-new studio of Jean Ah Voune. Many amazing musicians feature on the album: Teddy Baptiste, Babette Seguenot, Patrick Marvilliers, Jean-Jacques Harrison, Philippe Chavriacouty and Bernard "Brice" Legros directing.
The music applies a range of rhythms evolving between maloya, funk and jazz-rock. Zoun's music is an audacious musical construction driven by a rule-breaking attitude, in demand for recognition. However, when the music scene in Réunion went through an unprecedented explosion, he put aside his piano, flute and various percussions, became Carla’s dad and shifted to real estate negotiation.
A new life, until a tour in India, Gilbert Pounia, the charismatic leader of Ziskakan, revived Zoun's spark for music. That marked the start of Zoun's ongoing come back.