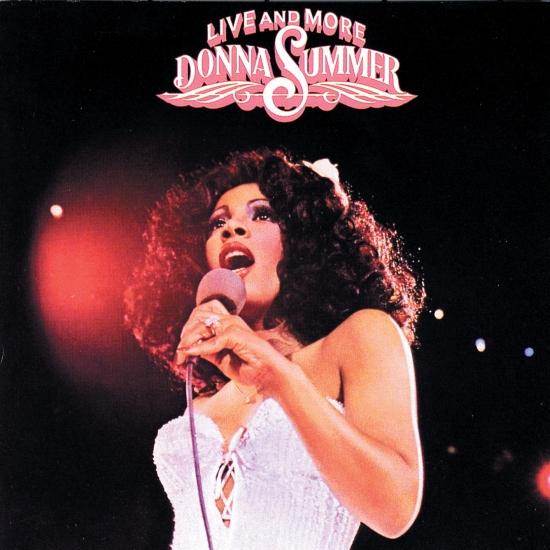 An overstuffed double-length set from Donna Summer – one that features some of the live material promised in the title, plus some even better studio work as well! The first 3 sides of the album feature Donna recorded live – putting over tunes with a bit more personality and almost a sense of spontaneity that we wouldn't expect – on titles that include "Fairy Tale High", "Only One Man", "I Remember Yesterday", "I Love You", "Spring Affair", "Mimi's Song", "I Feel Love", and "Last Dance". But even better is the 4th side of the record – which features the extended "MacArthur Park Suite" – Donna's masterful reworking of the Jimmy Webb classic, stretched out to even greater length than the original!
"After becoming the queen of disco thanks to orgasmathon hits like "Love to Love You Baby" and "I Feel Love," Donna Summer topped off her five-year rise to fame with this live set. Certainly not a contender for first-disc choice, Live and More still works quite well as a '70s sampler for the converted. And since disco was the party music par excellence, the album's feel is one of a all-nighter in action. Featuring her signature hits and a fat chunk of disco tracks from the Once Upon a Time record, sides one and three solidify Summer's reputation as one of the most exciting and slick singers on stage. Balancing out the requisite dance material, Summer spends side two waxing nostalgic via a pop standards medley ("The Man I Love," "I Got It Bad and That Ain't Good," "Some of These Days") and some nice jazz and blues-imbued fare of her own. And ending the album on a very high note, Summer indulges in "McArthur Park Suite," a classic long-player that bookends two of Summer and producer Giorgio Moroder's pop disco numbers with a dance-friendly take on Jimmy Webb's monumental classic. Along with cloud-walking bouncers like "I Love You" and "Last Dance," this closing piece finds Summer at her sophisticated and tuneful best. There's nothing here to eclipse the original versions of these cuts -- save for the Webb cover, which is new -- but the Summer faithful will nonetheless want to pick up this very enjoyable concert recording." (Stephen Cook, AMG)
During the concert, Summer performed a large number of her disco songs - both her hit singles, and a selection of songs from her previous album, Once Upon a Time. However, in this album, Donna also experiments with other musical styles such as jazz, in a medley she named "The My Man Medley". It consists of the George Gershwin song, "The Man I Love", together with "I Got It Bad and That Ain't Good" and the old standard "Some of These Days", neither of which she had recorded previously. She also performed a version of the ballad "The Way We Were", originally recorded by Barbra Streisand for the film of the same name, again, never previously recorded by Summer, but a big favorite of her live concerts. This was followed by a self-written ballad called "Mimi's Song", dedicated to her young daughter, Mimi. Mimi was present at this concert for Summer to sing the song to her, and she is heard on the recording saying goodnight to the audience! The concert ends with one of Summer's best-known songs in the United States - "Last Dance". This hit song is included on the soundtrack of the film Thank God It's Friday, in which Summer had also acted. The composer, Paul Jabara, won an Academy Award for Best Song from a motion picture, and Summer herself won her first Grammy Award for Best Female R&B Vocal Performance with this song. A personal favorite of Summer's, it was one of the first disco songs to feature a slow ballad-tempo both at the beginning and in the middle of the song. This would become a format that Summer would use on several other songs. Some versions of "Last Dance" have the slow part removed from the middle but keeps it at the beginning. The full version, however, was sung at this concert.
Donna Summer, vocals
Digitally remastered

Love To Love You Baby (Remastered)

Love To Love You Donna

On The Radio: Greatest Hits Volumes I & II (Remastered)

Once Upon A Time

Donna Summer
Maintaining an unbroken string of hits throughout the 70s and 80s, most of which she wrote, Donna Summer (1948-2012) holds the record for most consecutive double albums to hit #1 on the Billboard charts (three) and is the first woman to have four #1 singles in a twelve-month period, three as a solo artist and one as a duo with Barbra Streisand. A five-time Grammy Award-winner, she was the first artist to win the Grammy for Best Rock Vocal Performance, Female (1979, "Hot Stuff"), as well as the first-ever recipient of the Grammy for Best Dance Recording (1997, "Carry On").
She held six American Music Awards, three consecutive #1 platinum double albums (she’s the only artist, male or female, ever to accomplish this), 11 gold albums, four #1 singles, 2 platinum singles, and 12 gold singles. Donna was also the first female artist to have a #1 single and #1 album on the Billboard charts simultaneously (“MacArthur Park” and Live & More, 1978), a feat she also repeated six months later (“Hot Stuff” and Bad Girls, 1979). She has charted 21 #1 hits on the Billboard Disco/Dance charts over a period of 25 years, a milestone solidifying her as THE Queen of Dance. In 2004, she became one of the first inductees, as both an Artist Inductee and a Record Inductee (for 1977's "I Feel Love") into the Dance Music Hall of Fame in New York City.
In 2013, Donna Summer was inducted into the Rock & Roll Hall of Fame. It is estimated that Ms. Summer has sold more than 130 million records worldwide.