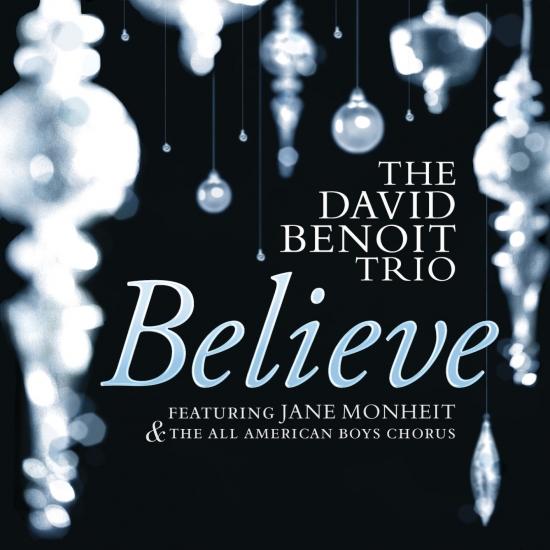 GRAMMYr-nominated pianist/composer/arranger David Benoit and GRAMMYr-nominated vocalist Jane Monheit continue their synergy from 2 In Love to create Believe, a Christmas album full of holiday favorites that will inspire and warm the heart throughout the holiday season. Renowned jazz flautist Tim Weisberg and The All-American Boys Chorus are featured on the album as well.
"Just four months after 2 in Love, David Benoit's collaborative album with vocalist extraordinaire Jane Monheit, the pair deliver Believe, a Christmas album. Working with the pianist's trio of drummer Jamey Tate and bassist David Hughes, and the All-American Boys Chorus on a few numbers, they deliver holiday standards, new takes on Vince Guaraldi's classic A Charlie Brown Christmas material (on the 50th anniversary of its broadcast), and some surprises. Guaraldi's presence is felt throughout, including in the Benoit original "Just Like Me," co-written with Guaraldi's lyricist Lee Mendelson for the 2015 Peanuts film. Believe's title track comes from the film The Polar Express. Monheit's vocal on the track, underscored by the trio and chorus, is simultaneously warm and majestic. The chorus also backs Monheit on the ubiquitous yet always moving "Christmas Time Is Here." It precedes an inspired reading of the now familiar "Guaraldi Medley," which has been part of Benoit's Christmas concerts for years. "Santa Claus Is Coming to Town" is a hot, cut-time read with Monheit's fleet scatting as the improvisational component. "My Favorite Things" is not normally associated with Christmas, but with Monheit's delivery at the fore, it becomes inseparable from the album's spirit. "My Little Drum" -- Guaraldi's arrangement of "The Little Drummer Boy" -- features the chorus with Hughes' bassline punctuating a gently swinging trap kit and Benoit's sparking pianism. Mel Tormé's "The Christmas Song" may be one of those nuggets that has been overdone, but Monheit and the chorus sing it like they mean it, closing this set with elegance. Believe is a classy contemporary jazz album that celebrates the Christmas season, not a generic volume for the holiday catalog. Of the three holiday recordings in Benoit's catalog, this is easily the best." (Thom Jurek, AMG)
The David Benoit Trio:
David Benoit, piano
Jamey Tate, drums
David Hughes, bass
Jane Monheit, vocals
The All-American Boys Chorus