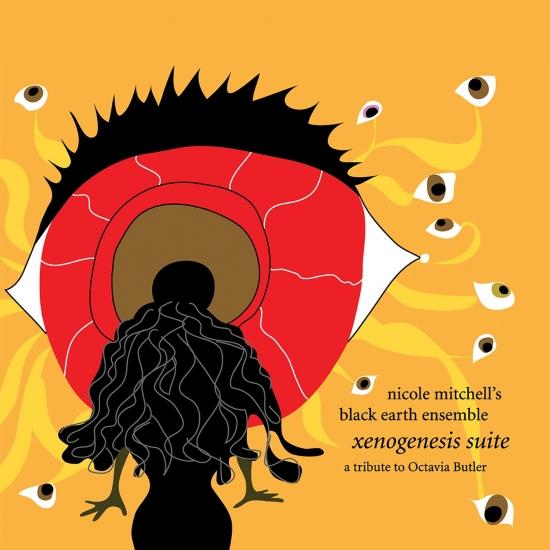 Xenogenesis Suite: A Tribute to Octavia Butler is the new studio recording of Chicago-based flutist/composer Nicole Mitchell's extended work of the same name, inspired by the work of Afrofuturist writer Octavia Butler (1947 - 2006), a Hugo, Locus and Nebula Award winner and the first science fiction author to receive the MacArthur Foundation "Genius" Grant. The piece, realized by her decade-old group, Nicole Mitchell's Black Earth Ensemble, received its world premiere in June 2007 at the 12th annual Vision Festival in New York and was performed again at the Chicago Cultural Center in December 2007.
"Brooding and sometimes harrowing," explains the Chicago Reader's Peter Margasak in an August 2007 feature article, "[Xenogenesis Suite] combines lyrics and nonverbal vocals with jagged, dissonant instrumental arrangements to convey the story of a black woman abducted by aliens after humanity nearly kills itself off in a nuclear war - her captors need to interbreed with other species to remain genetically viable, and she's asked to recruit other humans to help."
"A surprisingly effective combination of disturbing surrealism delivered with raw emotion and lyrical experimentation, Xenogenesis Suite is an endlessly rewarding listen." (AllAboutJazz)
"Though the intent is to prod rather than please, Mitchell’s dyspeptic horn harmonies possess a coarse beauty." (Down Beat)
"Xenogenesis Suite is a very strong and convincing proposition from flutist Nicole Mitchell. Moving, intricate, and immediate, this album marks a paradigm shift in her work as a composer, toward a much more personal voice. This piece is based on Octavia Butler's novel Dawn, a reflection on how human beings can adapt to inhuman circumstances: "If anything you had known is no longer, and you were placed in a seamless space, what would you feel?" (from the track notes). The main (and sole) character, a woman, goes through feelings of fear (of the unknown), withdrawal (from her past), anguish (at what is to come), repulsion (at alien life forms), and resolution (to start anew). Singer Mankwe Ndosi portrays these emotions with stunning beauty, mostly without any lyrics, her voice often featured as the main instrument through the nine movements. Mitchell's music is at times expressionistic (the dark "Sequence Shadows" or the uplifting "Dawn of a New Life," which has echoes of the ecstatic side of John Coltrane) and at times more abstract. The score leaves ample room for improvisation shaped into group macro-movements, but there are also plenty of written-down passages, from ostinati to riffs, fragile melodies, and ominous harmonic progressions. The opening "Wonder," "Sequence Shadows," and "Adrenalin" are the album's highlights, maybe simply because they stray further away from the Art Ensemble of Chicago's ethos. Mitchell's Black Earth Ensemble displays excellent musicianship, but the focus is on a group sound and the score, not on individual prowess (Ndosi's vocals aside). Even Mitchell's flute remains discreet. Then again, Mitchell has never been about flashiness. Xenogenesis Suite is the kind of album that gains depth with each listen." (François Couture, AMG)
Mankwe Ndosi, voice
Nicole Mitchell, flute
David Young, trumpet
David Boykin, tenor saxophone
Tomeka Reid, cello
Justin Dillard, piano
Josh Abrams, bass
Marcus Evans, drumset
Avreeayl Ra, percussion 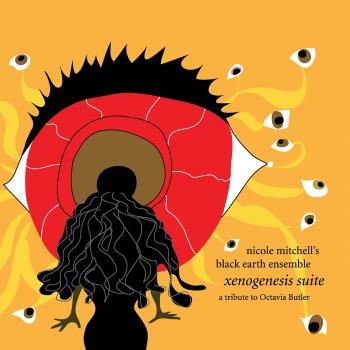 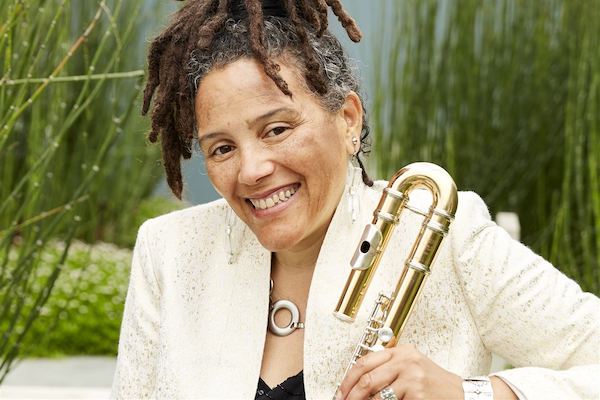 Nicole M. Mitchell
is an award-winning creative flutist, composer, bandleader and educator. She is perhaps best known for her work as a flutist, having developed a unique improvisational language and having been repeatedly awarded “Top Flutist of the Year” by Downbeat Magazine Critics Poll and the Jazz Journalists Association (2010-2017). Mitchell initially emerged from Chicago’s innovative music scene in the late 90s, and her music celebrates contemporary African American culture. She is the founder of Black Earth Ensemble, Black Earth Strings, Sonic Projections and Ice Crystal, and she composes for contemporary ensembles of varied instrumentation and size, while incorporating improvisation and a wide aesthetic expression. The former first woman president of Chicago’s Association for the Advancement of Creative Musicians, Mitchell celebrates endless possibility by “creating visionary worlds through music that bridge the familiar with the unknown.” Some of her newest work with Black Earth Ensemble explores intercultural collaborations; Bamako*Chicago, featuring Malian kora master, Ballake Sissoko, made its American debut at Chicago’s Hyde Park Jazz Festival in September 2017, and Mandorla Awakening with Kojiro Umezaki (shakuhachi) and Tatsu Aoki (taiko, bass, shamisen), was just recently released on FPE records (Chicago) last spring. Recently she celebrated a compositional premiere with Procession Time, a suite inspired by the work of Harlem Renaissance artist Norman Lewis, that was performed by the San Francisco Contemporary Music Players and conducted by Steve Schick in October 2017. Mitchell has also recently been interested in multidisciplinary work, through the incorporation of original video art with her music (Mandorla Awakening I and II, Interdimensional Interplay for Solo Disklavier and Prerecorded Flute). In January 2018, Mitchell was recently the Artist in Residence at New York’s Winter Jazz Fest, where she performed four suites of her compositions, including Art and Anthem (for poet Gwendolyn Brooks), Maroon Cloud (inspired by her writing “What Was Feared Lost” from Arcana VIII edited by John Zorn), Pteradatyl, a new trio with vocalist Sara Serpa and Liberty Ellman, and her latest Afrofuturist suite, Mandorla Awakening, which was cited as a top jazz recording in the New York Times and the LA Times for 2017. As a composer, Mitchell has been commissioned by the French Ministry of Culture, the Chicago Museum of Contemporary Art, Art Institute of Chicago, the Stone, the French American Jazz Exchange, Chamber Music America (New Works), the Chicago Jazz Festival, ICE, and the Chicago Sinfonietta. Mitchell has performed with creative music luminaries including Craig Taborn, Roscoe Mitchell, Joelle Leandre, Anthony Braxton, Geri Allen, George Lewis, Mark Dresser, Steve Coleman, Anthony Davis, Myra Melford, Bill Dixon, Muhal Richard Abrams, Ed Wilkerson, Rob Mazurek, and Billy Childs, and Hamid Drake. She is a recipient of the Herb Alpert Award (2011), the Chicago 3Arts Award (2011) and the Doris Duke Artist Award (2012). Mitchell is a Professor of Music at University of California, Irvine, teaching composition and improvisation in the graduate program of Integrated Composition, Improvisation and Technology.