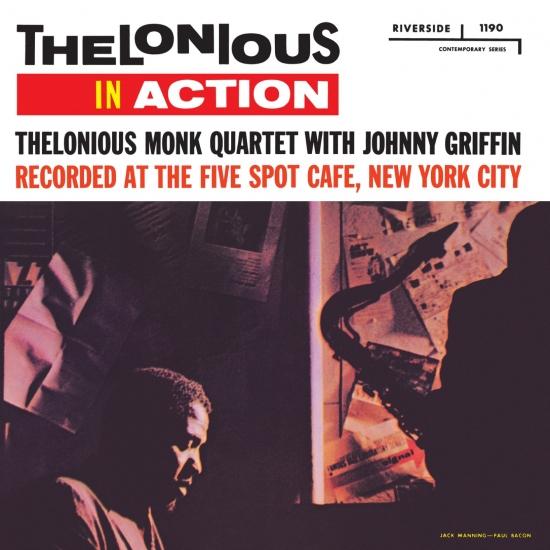 „Among Thelonious Monk's brilliant musical associations, the one with tenor saxophonist Johnny Griffin sometimes gets overlooked. This 1958 recording catches the quartet with bassist Ahmed Abdul-Malik and drummer Roy Haynes on its home turf, New York's Five Spot Cafe. Griffin's gruffly compressed sound and high-speed, coiling lines are a fine foil for Monk's spare and pointed comping, bringing a distinct and special intensity to Monk's music. Together the group turns in classic renditions of familiar Monk tunes, including a brilliant Griffin performance of "Blue Monk."
„Although the contents of the original Thelonious in Action vinyl comes from the August 7, 1958 show, the reissue, which was released three decades later, incorporates over 20 minutes of extras from a July 9 gig that had been previously rejected by the artist. While in exceptional form, Monk is far from casting the only or even the brightest light during these unforgettable sides. Joining him on-stage at the legendary Five Spot club are: Johnny Griffin (tenor sax), Ahmed Abdul-Malik (bass), and Roy Haynes. It's unfortunate that this unit did not remain together for any length of time as they are able to launch Monk's compositions into some fairly significant places. Johnny Griffin's aggressive performance style incorporates a lyrical and melodic undertone perfectly complementing Monk's sporadic inflections. "Coming On the Hudson" features Griffin weaving his magic around the melody while providing a decisive Coltrane-esque counterpoint to which Monk precariously locates his responses. The intensity of "Rhythm-A-Ning" lifts the whole combo after quickly developing the chorus. Griffin builds line upon melodic line, after which Monk responds in kind by adding distinct punctuations of his own. So powerful is Griffin's onslaught, Monk can be heard indicating more than once that Griffin should indulge in another verse. After a ragged but right beginning, "Evidence" becomes transcendental with Griffin, Monk, Malik, and Haynes -- who is frenetically brilliant throughout -- diving into solos which envelop the melody and ultimately expand the unique patterns and motivations. The CD reissue contains a supplementary (if not definitive) take of "In Walked Bud" from an earlier live recording session that is available in its entirety on the Complete Riverside Recordings box set.“ (Lindsay Planer, AMG)
Thelonious Monk, piano
Johnny Griffin, tenor saxophone
Ahmed Abdul-Malik, double bass
Roy Haynes, drums
Produced by Orrin Keepnews
Digitally remastered