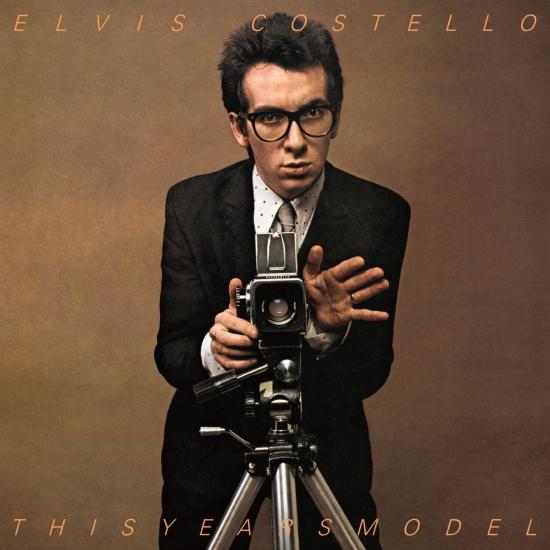 "This Year's Model was begun at Eden Studios, London at the end of 1977, just after the single release of "Watching the Detectives", and completed at the beginning of 1978. The Sessions, which had to be scheduled at either end of our first American tour, took about eleven days. Most of the songs had been played "live" since our first appearances in July '77. Others, such as "Pump it Up", were written in the last days of the infamous "Live Stiffs" package tour which ended shortly before the recording."
Around this time Jake Riviera parted company with Stiff Records taking Nick Lowe and Elvis with him. "This Year's Model" was therefore the first release on the new Radar label. Elvis and The attractions continued what would become an unbroken run of eight top thirty singles in Britain with "Chelsea" and "Pump it Up". These were issued in March and June '78.
"By this point I had lost track of time as we completed our first headlining tour of Britain and Europe and two further tours of America, plus a visit to Toronto, where our date at "El Mocambo" was broadcast live on the radio and later issued as a Canada-Only promotional album. By the time "Radio Radio" was released in October '78 we had already recorded our next album Armed Forces" In America, Columbia Records had released "My Aim is True" with the addition of "Watching the Detectives", but when it came time to issue "This Year's Model" they requested bizarre changes in the running order. These included the omission of "Night Rally" and "(I Don't Want To Go To) Chelsea" (Despite it's success as a British single) and the inclusion of "Radio Radio".
"Where My Aim Is True implied punk rock with its lyrics and stripped-down production, This Year's Model sounds like punk. Not that Elvis Costello's songwriting has changed -- This Year's Model is comprised largely of leftovers from My Aim Is True and songs written on the road. It's the music that changed. After releasing My Aim Is True, Costello assembled a backing band called the Attractions, which were considerably tougher and wilder than Clover, who played on his debut. The Attractions were a rock & roll band, which gives This Year's Model a reckless, careening feel. It's nervous, amphetamine-fueled, nearly paranoid music -- the group sounds like they're spinning out of control as soon as they crash in on the brief opener, "No Action," and they never get completely back on track, even on the slower numbers. Costello and the Attractions speed through This Year's Model at a blinding pace, which gives his songs -- which were already meaner than the set on My Aim Is True -- a nastier edge. "Lipstick Vogue," "Pump It Up," and "(I Don't Want to Go To) Chelsea" are all underscored with sexual menace, while "Night Rally" touches on a bizarre fascination with fascism that would blossom on his next album, Armed Forces. Even the songs that sound relatively lighthearted -- "Hand in Hand," "Little Triggers," "Lip Service," "Living in Paradise" -- are all edgy, thanks to Costello's breathless vocals, Steve Nieve's carnival-esque organ riffs, and Nick Lowe's bare-bones production. Of course, the songs on This Year's Model are typically catchy and help the vicious sentiments sink into your skin, but the most remarkable thing about the album is the sound -- Costello and the Attractions never rocked this hard, or this vengefully, ever again." (Stephen Thomas Erlewine, AMG)
Elvis Costello, guitar, vocals
Steve Nieve, keyboards
Bruce Thomas, bass
Pete Thomas, drums
Digitally remastered
Zur Info: wir bieten dieses Album in der nativen Abtastrate von 96kHz, 24-Bit an. Die uns zur Verfügung gestellte 192kHz-Version wurde hochgerechnet und bietet keinen hörbaren Mehrwert!

The Boy Named If

The Return Of The Spectacular Spinning Songbook (Live)

My Aim Is True

Elvis Costello
began working as a professional musician 35 years ago, shortly after the release of his first album, “My Aim Is True”. He has made more than 27 studio records, three live albums and numerous guest appearances on stage, studio and screen as well as working as a record producer, bit-part actor and composing music for television drama and dance performance.
He has toured the world with The Attractions, The Imposters and the pianist, Steve Nieve, performing with symphony and jazz orchestras as well as in solo performance. His catalogue of songs includes collaborations with Paul McCartney, Allen Toussaint and Burt Bacharach with whom he won a Grammy for “I Still Have That Other Girl” from their 1998 collaboration, Painted From Memory. Costello’s songs have been recorded by George Jones, Chet Baker, Johnny Cash, Roy Orbison, Dusty Springfield and Robert Wyatt.
Elvis Costello and The Attractions were inducted into the Rock and Roll Hall of Fame in 2003. In the same year he was awarded ASCAP’s prestigious Founder’s Award. His last record was 2010s National Ransom, produced by T-Bone Burnett. Between 2008 and 2010, Costello was the host of twenty episodes of the interview and music show, “Spectacle” on the Sundance Channel.