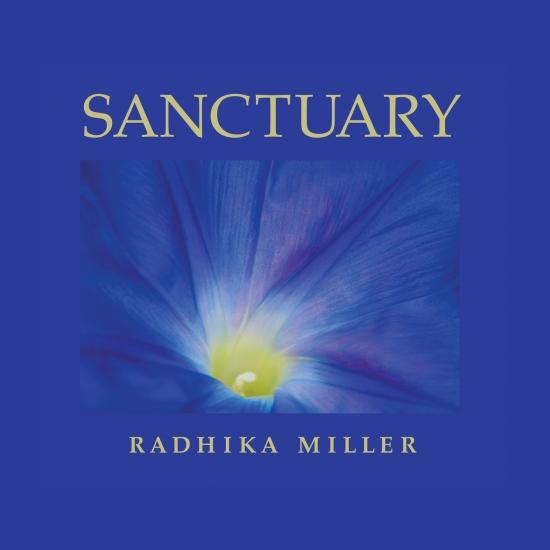 This album is dedicated to the late and great Tony D Anna, my musical partner of 25 years. Many of my songs were written to soothe friends going through breast cancer treatments or loss. May these songs bring a calm to all of us during these difficult times. Though she studied classical piano as a child, Radhika Miller took up the flute in college after reading some passages about the instrument in a yoga book. It turned out to be more than a whim. By the end of her first year, she was studying in France with famed classical virtuoso Jean-Pierre Rampal. Three years later, Miller graduated from San Francisco State University with a degree in music. Inspired by her love of sacred vocal music, she developed a style she calls "the singing flute." Over the years, Miller has arranged and transcribed sacred classical scores, choral works, and spirituals for her own performances, involving flute, harp, piano, and cello to create prayerful, uplifting works while collaborating with such Grammy award winning artists as David Darling and Peter Rowan.
"Sanctuary" is a most welcomed and long-awaited album from Radhika Miller. She, once more, gathered together a talented group to join her in creating this most delightful album. It sits along with the very best of her outstanding catalog." (Justine Willis Toms, Host, Co-founder, New Dimensions Radio)
Radhika Miller

Radhika Miller
was born and raised in San Francisco, the fifth of nine children. Her parents encouraged a creative childhood in a home complete with puppet theater, ballet bars, pianos, painting easels, dance room with a real juke box, and family sing-a-longs led by a mother who is a professional soprano as well as an accomplished pianist.
At age six, Radhika started her own piano lessons. By nine she had discovered the works of Stravinsky and Bartok, whose modern tones spoke to her in a language that sparked an early interest in composing. Her love of choral music led to singing with the San Francisco Symphony Chorus where she met Louis Magor, the renowned conductor. Under his mentorship, she found an artistic model of pure tone that she emulates today in her flute playing.
“It was on a whim,” says Radhika, “that I began playing the flute in college. Inspired by a passage about the flute in a yoga book, I decided to try one, find a good teacher and spend about six hours a day studying it.” By the end of her first year she was studying at the Academie International in France, with Jean Pierre-Rampal. Three years later she graduated from San Francisco State University with a Bachelor’s Degree in Music, with an emphasis in flute, composition, and choral music. A desire to link the human voice with an instrument and to unite imagination with the sounds and beauty of nature, has led her into the realm of what she calls “the singing flute”, which combines her love of nature and choral music with an emotional rendition of music rather than mere technical virtuosity. Hard pressed to find flute music (outside of Bach) that spoke to her heart’s calling, Ms. Miller began to transcribe soprano parts from sacred music scores, spirituals and choral works for her own performance on flute with harp, piano and cello accompaniment and to create her own prayerful, uplifting compositions.
In 1983, at the suggestion of the great spiritual teacher, Swami Satchidananda, she made a recording of her flute music for people to become peaceful and relaxed. The album sold far beyond the Integral Yoga community launching her into the recording business with her own label, Radhika Miller Music (RMM). Her twelve titles include her newly released Dancing Light, her best selling Sunlit Reverie (over 150,000 sold), the holiday classic Blossoms in the Snow, the deeply relaxing Heaven, Gems of Grace, Arabesque, Here and Faraway, Origins, The Lark’s Bride, Within the Wind, Lotus Love Call with soulful interpretations of music from the Renaissance through impressionism, including spirituals and folk songs as well as many of her own compositions and improvisations performed with incredibly talented players (David Darling, Edgar Meyer, Mike Marshall, Michelle Sell, John Stewart, Peter Rowan, Allaudin Mathieu, Louis Magor, Shira Kammen and Tony D’Anna).
Radhika’s other musical achievements include a Parent’s Choice Best Children’s Album award for Laughing Waters, her collection of tongue twisters, stories, sing-a-longs and dance tunes with blue grass greats Edgar Meyer, Jerry Douglas, Mike Marshall, Peter Rowan and actor Fred Curchack. Radhika’s music is also part of the best selling compilation album Celtic Twilight on the Hearts of Space label.
In addition to her recording achievements, Ms. Miller is an accredited music educator, and is considered a master teacher in her field. She has created music and dance curriculums for the California public school system and has offered several teacher training in-services. She has taught “Musicality for Dancers” as part of Marin Ballet’s Guest Master Series and was founder and artistic director of YOUNG IMAGINATIONS, a non-profit multi-cultural arts education company dedicated to providing inspired music, dance and drama education to thousands of school children. Radhika is also an experienced yoga instructor having taught in several universities, homes for the elderly and Girl Scout groups in the US and Europe (she is comfortable speaking French, and some Italian and Swiss German). Along with her husband and two children, Radhika is an enthusiastic nature lover on hiking trails or in the garden of her Northern California home.