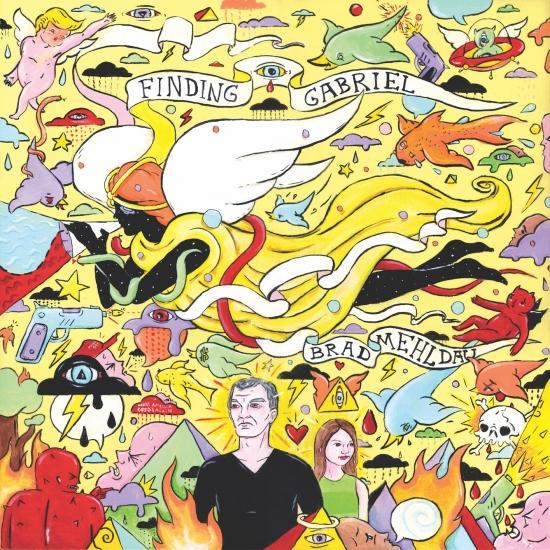 The album comprises nine thematically related songs by Mehldau and features performances by him on piano, synthesizers, percussion, and Fender Rhodes, as well as vocals. Guest musicians include Ambrose Akinmusire, Sara Caswell, Kurt Elling, Joel Frahm, Mark Guiliana, Gabriel Kahane, and Becca Stevens, among others.
Mehldau explains, "Finding Gabriel came after reading the Bible closely for the last several years. The prophetic writing of Daniel and Hosea resonated in particular, as well as the wisdom literature of Job and Ecclesiastes, and the devotional words of Psalms. The Bible felt like a corollary and perhaps a guide to the present day—one long nightmare or a signpost leading to potential gnosis, depending on how you read it. The archangel Gabriel appeared to Daniel, telling him, 'At the beginning of your pleas for mercy a word went out, and I have come to tell you, for you are greatly loved. Therefore consider the word and understand the vision.' It seemed that the trick was to listen to Gabriel's words through all the noise and find a way to explain the bedlam, not only to oneself, but to a young person with less of a reference as to what is right-side up—perhaps one's own children.
"In this upside down state of affairs, the prophet is a fool: 'The man of the spirit is mad, because of your great iniquity and great hatred,' Hosea says. He meant that the prophet indeed speaks the truth, but no one believes it anymore—it's all fake news, no matter on which side of the fence you are standing. There is a temptation to make it all go away and escape into even more distraction, but this is only temporary refuge and leads one further into a matrix of falsehood. Eventually one comes up for air with more confusion and maybe even despair. With all the supposed connectivity, it seems that we are more separated from each other than ever, submerged in the deep water of unhappy solitude. Where to turn for the truth? Ask, with a humble heart, listen deeply, and the answers will come.
"The music initially sprang out of a new synth I was discovering—the Dave Smith/Tom Oberheim OB-6 featured on several tracks," Mehldau continues. "I built up many of the tracks beginning with synths and Mark Guiliana on drums, in a process similar to our previous collaboration, Taming the Dragon. Layers were added, and the human voice became an important element—not with text, but as a pure expression of harmony and emotion. I worked with singers I've admired and been close to over the past several years—Becca Stevens, Kurt Elling, and Gabriel Kahane—and sang myself as well. Strings and winds were added and the project became more orchestral, with features from stellar musicians: trumpet player Ambrose Akinmusire, tenor saxophonist Joel Frahm, and violinist Sara Caswell.
"A new experience for me on three of the tracks was to go the opposite as well—doing everything as a one-man band. Both the collaborations and solo flights were a learning experience and full of discovery. John Davis, who engineered and mixed the record, was an integral player from beginning to end at Bunker Studios in Brooklyn, creatively contributing to the sonic landscape and finally putting all the pieces together."
Although Brad Mehldau is best known as a jazz composer and improviser, he has made several albums that fall outside of the mainstream jazz genre, including his 2001 Largo, produced by Jon Brion. Wide-ranging in texture and big in scale, it features woodwind or brass ensembles are on several tracks, as well as a heavy emphasis on powerful drums. In 2010, Nonesuch released his second collaboration with Brion, Highway Rider, which includes performances by Mehldau's trio—drummer Jeff Ballard and bassist Larry Grenadier—as well as drummer Matt Chamberlain, saxophonist Joshua Redman, and a chamber orchestra led by Dan Coleman. Mehldau also orchestrated and arranged the album's fifteen pieces for the ensemble.
Mehldau's 2014 collaboration with Mark Guiliana, Mehliana: Taming the Dragon was praised by All About Jazz as "another superlative effort in the career of a pianist who has been consistent in his commitment to excellence and genre-defying creativity—and one that shines a major spotlight on the stylistically unbound and similarly forward-thinking Guiliana." Mehliana featured Mehldau on Fender Rhodes and synthesizers and Guiliana on drums and effects, playing twelve original tunes—six by the duo and six by Mehldau.
The 2004 solo disc Live in Tokyo was Mehldau's label debut. He has released seven albums with his trio: House on Hill, Day Is Done, Brad Mehldau Trio Live, Ode, Where Do You Start, Blues and Ballads, and last year's Grammy-nominated Seymour Reads the Constitution! Also released last year was the solo album After Bach, which comprises the pianist/composer's recordings of four preludes and one fugue from J.S. Bach's Well-Tempered Clavier, each followed by an "After Bach" piece written by Mehldau and inspired by its WTC mate.
Mehldau's additional collaborative records on the label include Love Sublime, Metheny Mehldau, Metheny Mehldau Quartet, Modern Music, Nearness with Joshua Redman, and Chris Thile & Brad Mehldau. His solo records also include Live in Marciac and the eight-LP/four-CD 10 Years Solo Live, which the New York Times says "contains some of the most impressive pianism he has captured on record."
Brad Mehldau, voices, keyboards, synthesizers, Hammond B-3, Fender Rhodes, piano, Steinway C grand piano, xylophone, drums
Becca Stevens, voice
Gabriel Kahane, voice
Kurt Elling, voice
Ambrose Akinmusire, trumpet, alto saxophone
Michael Thomas, flute, alto saxophone
Charles Pillow, soprano saxophone, alto saxophone, bass clarinet
Joel Frahm, tenor saxophone
Chris Cheek, tenor saxophone, baritone saxophone
Sara Caswell, violin
Lois Martin, viola
Noah Hoffeld, cello
Mark Guiliana, drums, electronic drums 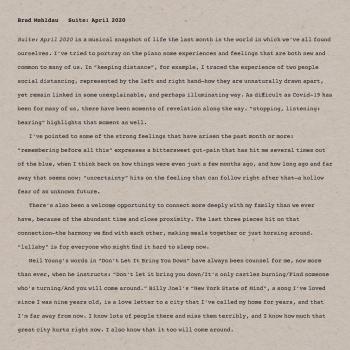 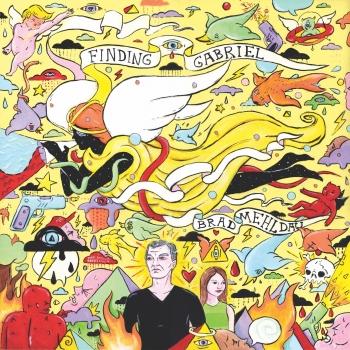 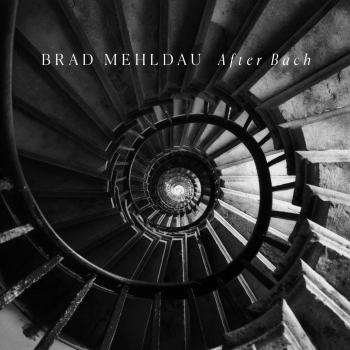 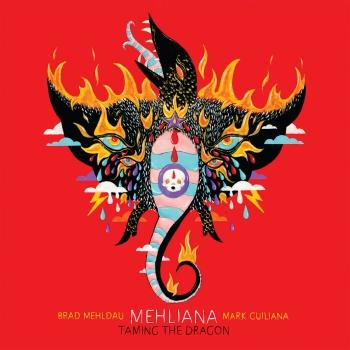 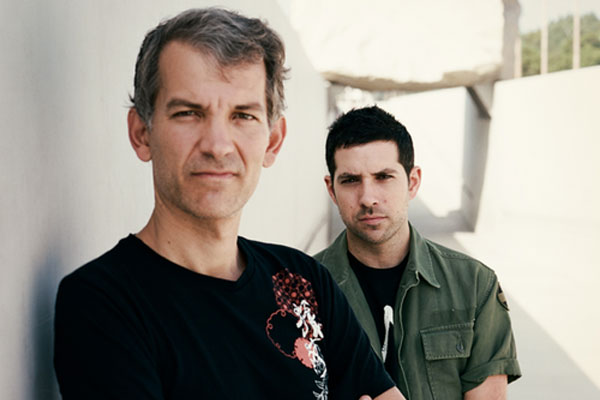 Brad Mehldau
played in a number of different ensembles, including label mate Joshua Redman’s quartet, before becoming a bandleader himself in the 1990s. The Brad Mehldau Trio, which tours the world extensively, made eight acclaimed recordings for Warner Bros., including the five widely praised Art of the Trio albums with former drummer Jorge Rossy (released as a boxed set by Nonesuch in 2011). The pianist’s nine years with Nonesuch have been equally productive, beginning with the solo disc Live in Tokyo and including six trio records Day is Done, House on Hill, Live, Ode, and Where Do You Start, as well as a collaboration with soprano Renée Fleming, Love Sublime; a chamber ensemble album, Highway Rider; two collaborations with label mate Pat Metheny, Metheny Mehldau and Quartet, the latter of which also includes Trio members Jeff Ballard and Larry Grenadier; a CD/DVD set of live solo performances, Live in Marciac; and collaborations with genre-crossing musicians on Modern Music, with composer/pianist Kevin Hays and composer/arranger Patrick Zimmerli. Additionally, he produced saxophonist Joshua Redman’s 2013 release Walking Shadows.
Mark Guiliana
According to Modern Drummer, Mark Guiliana is “at the forefront of an exciting new style of drumming.” The New Jersey native’s unique and un-compromised approach to playing the drums has earned him international acclaim as both a leader and a sideman. In 2004, Guiliana created HEERNT, an “experimental-garage-jazz” trio based in New York. The band’s debut record, Locked in a Basement, was called the record “the most exuberant, dramatic, beautiful, sassy, genre-busting little outing that I've heard since I don't know when” by legendary drummer Bill Bruford (Yes, King Crimson). As a sideman, Guiliana’s longest partnership has been with world-renowned jazz bassist Avishai Cohen. He toured all over the world with Cohen from 2003 until 2008, performing on six studio records and a live DVD recorded at the Blue Note in Manhattan. Guiliana has also recorded and/or performed with Meshell Ndegeocello, Dhafer Youssef, Wayne Krantz, Matisyahu, Jazz Mandolin Project, Jason Lindner, Brad Shepik, Bobby McFerrin, Tigran Hamasyan, and many more. His debut solo record, Beat Music, which was co-produced by Ndegeocello, was released in the spring of 2013. Guiliana plays Gretsch drums, Sabian cymbals, Vic Firth sticks, and Evans drumheads.