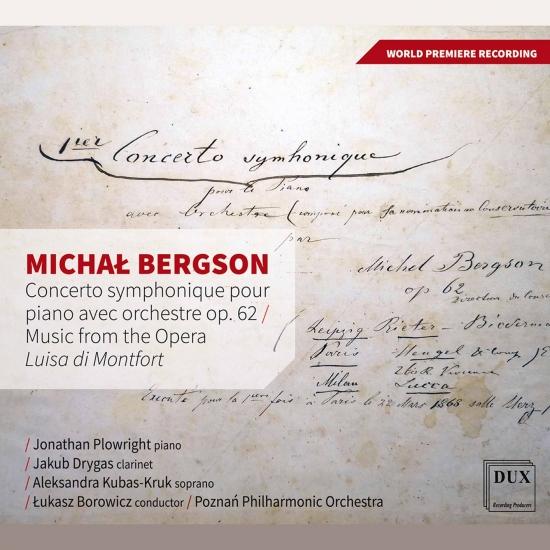 From the conductor: We live in an era of musical discoveries. For years manifested and defined only through the work of its most outstanding composers, Polish music has been reclaiming its all-embracing capacity: we get to know forgotten, underrated, sometimes outright ignored authors (in spite of their significant contribution to Polish culture). The epoch in the history of Polish music that is basically written anew is the time of the Partitions. In the history of European music, the nineteenth century was a period of profound changes: a bumpy road running from the late-Classicist period to the bloom and twilight of Romanticism, to the beginning of all modernist trends. In Polish music, it was the time of two titans: Fryderyk Chopin and Stanisaw Moniuszko; it was thanks to their work that Polish music survived, and gained new, original appearance. For generations of younger composers Chopins genius was a source of inspiration; his shadow, on the other hand, became for many an obstacle they were unable to surmount (among those who complained about the difficulty to break away from the post-Chopinesque tradition we find such names, as Mieczysaw Karowicz and Karol Szymanowski). Political situation in the 19th-century Poland hindered development of the orchestral movement; it was the opera, as well as chamber, and, above all, piano music that enjoyed greatest popularity. Such was the reality that shaped Micha Bergson, the hero of the current album.
"This album is a brilliant homage to Michal Bergson, true to the ‘élan vital’, an essential idea in Henri Bergson’s philosophy, which takes into account the creative impulse of man. One could not have honoured the work of his father more beautifully." (pizzicato.lu)
Jonathan Plowright, piano
Jakub Drygas, clarinet
Aleksandra Kubas-Kruk, soprano
Poznan Philharmonic Orchestra
Łukasz Borowicz, conductor 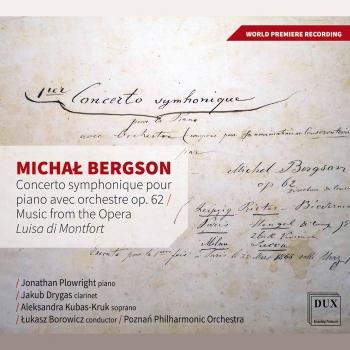 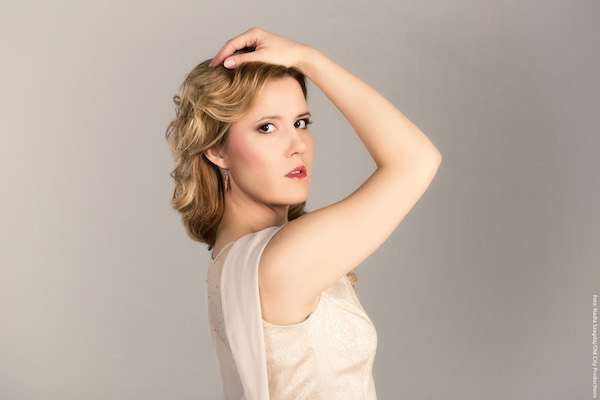 Aleksandra Kubas-Kruk
is one of the most outstanding young Polish sopranos. She studied at the Karol Lipiński Academy of Music in Wroclaw under Professor Danuta Paziuk-Zipser and at the University of Music and Performing Arts, Vienna.
Aleksandra Kubas-Kruk’s many competition successes have included Special Prize at the International Vocal Competition in Toulouse, First Prize and the Award for the best coloratura soprano at the St. Moniuszko International Vocal Competition in Warsaw, First Prize and Special Prize at the Karol Szymanowski International Vocal Competition in Lodz, and in the Halina Halska-Fijałkowska Polish Vocal Competition, First Prize at the Solomiya Krushelnytska International Competition of Opera Singers in Lviv, Special Prize at the Toti dal Monte International Vocal Competition in Treviso, and the Prize for the youngest finalist and the Audience Prize at the International Vocal Competition in Malmö. She received the Jan Kiepura Award for the best female singer in Poland and the Wroclaw Music Award for excellent performances of the Wroclaw Opera House. In 2015, she also was honored with the Award of the President of Wroclaw for the outstanding artistic achievements in 2014.
Aleksandra Kubas-Kruk made her professional operatic début as Gilda Rigoletto at the Wroclaw Opera and her international début as Kunegonde Candide in Lucca, Ravenna, Livorno and Pisa under the baton of Maestro Elio Boncompagni. Her début at the Bolshoi Theatre in Moscow as Queen of Shemakha The Golden Cockerel by Rimsky-Korsakow was followed immediately by a return invitation to sing Die Königin der Nacht Die Zauberflöte. At the Bolshoi Theatre she also performs Feu, Princesse, and Le Rossignol in Ravel’s L’enfant et les sortileges. She has also sung at the Theater Bonn in the title role of Lakmé.
As a resident Principal of the Wroclaw Opera she has sung Lucia Lucia di Lammermoor, Gilda Rigoletto, Adina L’elisir d’amore, Nanetta Falstaff, Oscar Ballo in Maschera, Susanna Le nozze di Figaro, Pamina Die Zauberflöte, Hanna Straszny dwor, Olimpia Les contes d’Hoffmann, Angel Angels in America, Sophie Der Rosenkavalier, Violetta La Traviata and many others. Her operatic repertoire also includes Baronessa La vera costanza (Haydn), Rosina Il barbiere di Siviglia, Sofia Il Signor Bruschino. She also is being invited by Opera Baltycka in Gdansk, where she performs Violetta in La Traviata and Hanna Straszny dwor.
In March 2015 she made her debut at the National Opera in Warsaw as Gilda in Rigoletto and in April she returned there as Hanna in Straszny dwor. From 2016 she sings main roles at: Teatro Verdi in Trieste (Rigoletto, La Sonnambula, Lucia di Lammermoor), Opera de Toulon (Die Entfuehrung aus dem Serail), Badische Staatstheater in Karlsruhe (Arminio, Alcina), Teatro di San Carlo in Naples (La Traviata). She also cooperates with Concertgebouw in Amsterdam and Tonhalle in Zurich. She has sung under the baton of: J.Lopez Cobos, V.Sinaisky, P.Eötvös, E.Boncompagni, J.Axelrod, S.Blunier, Ch.Moulds, J.Kaspszyk, A.Yurkevych, F.Bottigliero, Ł.Borowicz, T.Kozłowski, T.Strugała, E.Michnik, P.Klinichev, M.Pijarowski, M.Klauza, J.M.Zarzycki, S.Chrzanowski.
In 2015 she recorded several opera arias with Polish Radio Orchestra in Warsaw. She also cooperates regularly with National Philharmonic in Warsaw, Poznan Philharmonic and National Forum of Music in Wroclaw. Her upcomind engagements include: Alcina at Badische Staatstheater in Karlsruhe, Lucia di Lammermoore at Teatro Verdi in Trieste, La Triaviata at Teatro di San Carlo in Naples.
Aleksandra Kubas-Kruk has an extensive repertoire of oratorio and concert works, Lieder and songs in several European languages. She has performed in concerts and festivals in Poland, Germany, Czech Republic, and Italy.