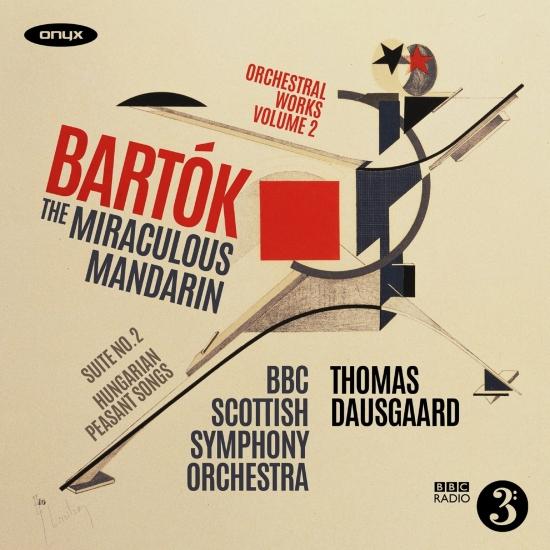 Bartók’s ‘The Miraculous Mandarin’ (published as ‘A Pantomime in One Act’) was composed at a time of violent unrest in Hungary. The Soviet Hungarian Republic had collapsed in 1919 and was replaced by an ultra-nationalist regime which persecuted communists, Jews and leftists and left over 1,500 dead and thousands imprisoned without trial.
It is against this bloody political and social backdrop that the composer, recovering from Spanish Flu, set about a musical depiction of Lengyel’s ‘pantomime grotesque’.
Prior to this period, and after the large-scale Suite No.1 of 1905, Bartók commenced work on a second suite. Smaller in scale than No.1 it is imbued with the folk music he had been studying. It was premiered in 1910.
Bartók was spared service in World War I after failing several medicals. He spent the war years collecting folk songs and some of these provided material for the Hungarian Peasant Songs, which he returned to in 1933 and orchestrated.
This album is the second in a survey of all the composer’s works for orchestra by Thomas Dausgaard and the BBC Scottish Symphony Orchestra.
BBC Scottish Symphony Orchestra
Thomas Dausgaard, conductor 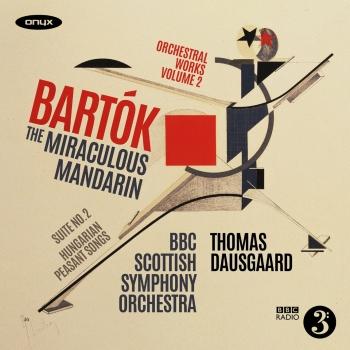 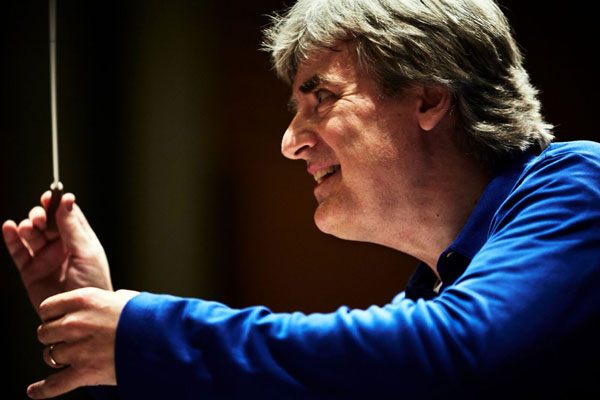 Thomas Dausgaard
is Music Director of the Seattle Symphony and Chief Conductor of the BBC Scottish Symphony Orchestra. He also holds titles as Conductor Laureate of the Swedish Chamber Orchestra, having served as Chief Conductor from 1997-2019, Honorary Conductor of the Danish National Symphony Orchestra, having served as Chief Conductor from 2004–2011, and Honorary Conductor of the Orchestra della Toscana. He has been awarded the Cross of Chivalry by the Queen of Denmark, and elected to the Royal Academy of Music in Sweden.
Dausgaard enjoys a distinctive profile as an artist “of huge conviction and outrageously good musicianship” (Europadisc), renowned for his creativity and innovation in programming, an extensive catalogue of critically-acclaimed recordings, and an “uncanny ability to project a sense of the necessity of the musical trajectory” (Bachtrack). He is passionate about music’s engagement with society and the issues of our time, and its relevance and potential as a vital and innovative force in the life of current and future generations.
As Music Director of the Seattle Symphony, alongside highly praised recordings of repertoire including Mahler’s Symphony No. 10, Nielsen’s symphonies, and the tone poems of Richard Strauss, he introduced an innovative ‘Roots’ programme spotlighting dialogue between artistic traditions and contextualising works like Sibelius’ Kullervo and Stravinsky’s Rite of Spring with folk musicians, Rachmaninov’s Symphony No 2 with orthodox chant, and Strauss’s Alpine Symphony with traditional alphorns and Bavarian dance. The ‘Roots 2.0’ project will see the orchestra inviting American artists from other genres to co-create symphonic music, as well as commissioning leading international composers to write new works inspired by and paired with Sibelius’s symphonies.
With the BBC Scottish Symphony, and fascinated with Scotland’s unique culture and its centuries of attraction for artists, Dausgaard has commissioned a range of works from British and international composers under the motto ‘Scottish Inspirations’. Again his experimental ‘roots’ programmes – many of them showcased at the BBC Proms – have shed revelatory light on composers like Brahms, Mahler, Debussy, Nielsen, Bartok and Sibelius – and forged collaborations with leading artists of other genres. Following the acclaimed recording of Sibelius’s Kullervo for Hyperion, he has embarked on a cycle of Bartok’s orchestral works for Onyx Classics, foregrounding the composer’s diversity of expression and inspiration from native musical cultures. International tours have taken the partnership to a weeklong residency in Tokyo, presenting the BBC Proms in Japan for the first time, a residency in Salzburg, and performances at Vienna’s legendary Musikverein.
As the artistic figurehead of the Swedish Chamber Orchestra for over two decades Dausgaard established the orchestra’s position on the international scene with the only complete recording of Beethoven’s complete orchestral works under the same partnership. Introducing historically-informed instruments, playing and seating arrangements, he developed the orchestra into one of the busiest touring and recording ensembles in Scandinavia, and explored the opportunities of bringing a chamber orchestra’s stylistic approach to more expansive symphonic repertoire, recording for BIS Records major works of Schubert, Schumann, Brahms, Bruckner, Wagner, Tchaikovsky and Dvorak. The ‘Brandenburg Project’, showcased at the 2018 BBC Proms, and released as a recording in 2021, commissioned six substantial new works from leading composers, to pair with J.S. Bach’s celebrated concerto cycle. Together Dausgaard and the Swedish Chamber have appeared at music centres around the world, including the Salzburg Festival, and his own orchestrations of Brahms’ Hungarian Dances are featured on their recording of the Brahms symphony cycle. In 2020 the partnership debuted his orchestration for choir and orchestra of Mussorgsky’s Pictures at an Exhibition, celebrating the close artistic relationship with the Swedish Radio Choir.
Throughout his successive positions as Principal Guest Conductor, Chief Conductor, and Conductor Laureate, Dausgaard led the Danish National Symphony Orchestra at home and on countless successful tours. With numerous recordings for EMI, Virgin, Chandos and DaCapo, the opening of the new concert hall in Copenhagen in 2009, and the introduction of a new highly successful after-work series, the collaboration highlighted a notable commitment to Nordic music, forging deep artistic relationships with the leading Danish composers Nørgård, Gudmundsen-Holmgreen, Ruders, Abrahamsen and Sørensen, and spearheading a newly published and recorded edition of Rued Langgaard’s cycle of sixteen symphonies.
As a guest conductor Dausgaard maintains close connections with many of the world’s leading orchestras including London’s Royal Philharmonic Orchestra, the Vienna Symphony, Gewandhausorchester Leipzig, the Symphonieorchester des Bayerischen Rundfunks, the Rundfunk-Sinfonieorchester and Konzerthausorchester Berlin, Swedish Radio Symphony, Gothenburg Symphony, Toronto Symphony, Houston Symphony, and the Bergen Philharmonic with whom he is recording a cycle of Bruckner symphonies for BIS. He has also recently appeared with the New York Philharmonic, St Petersburg Philharmonic, Orchestre Philharmonique de Radio France, Seoul Philharmonic, New Japan Philharmonic, as well as with Cleveland and Philadelphia Orchestras, the Los Angeles Philharmonic, London Symphony, Philharmonia Orchestra, Chamber Orchestra of Europe and Munich Philharmonic. He also appears regularly at prestigious festivals worldwide, notably the BBC Proms, the Edinburgh International Festival, the Salzburg Festival, Mostly Mozart, the George Enescu Festival, and Tanglewood.